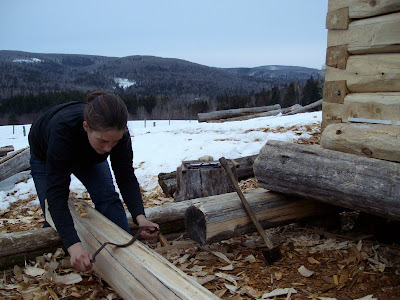 Some photos of a log cabin being built for the youngest member of the Vido family.  To be continued... 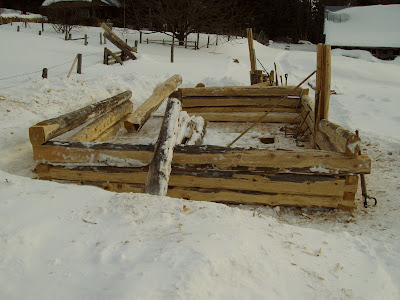 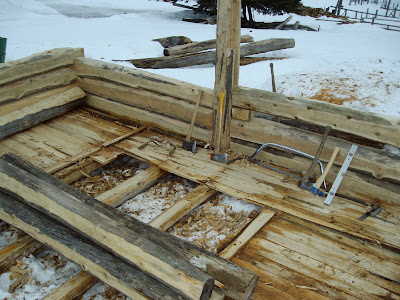 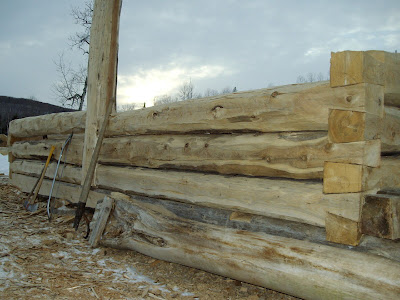 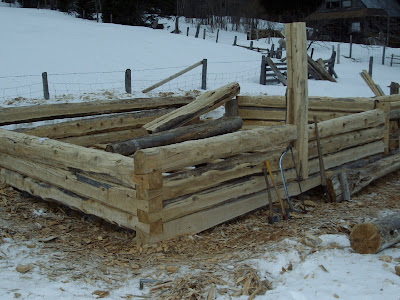 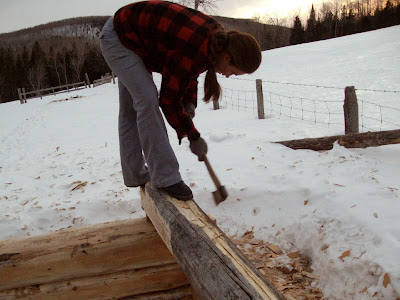 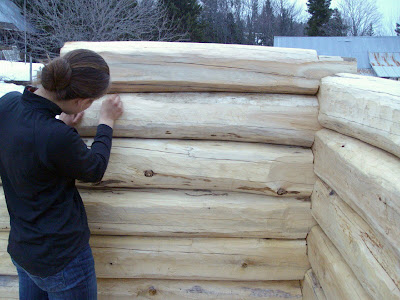 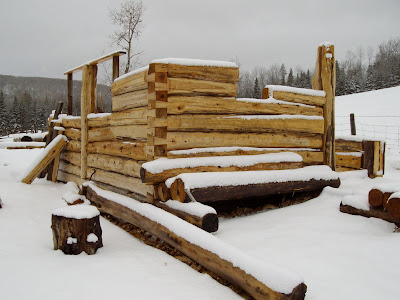 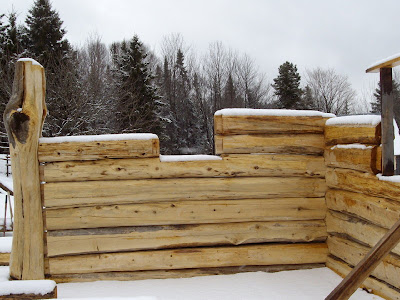 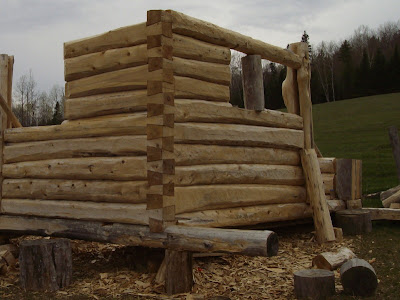 ﻿
Addendum dated January 6, 2012:
I regret that in spite of the apparent interest in this topic we have not continued the thread. One reason is simply that during the (8+month long) "farming season" much of the computer-related work needs to take a back seat. And, as destiny would have it, we were moved to put off the finishing of the cabin until more pressing matters (among them other building projects -- like a bee house, a root cellar and a new barn) received attention.
Of course, the few photos we sent were not meant as a "how-to" piece -- to necessarily be followed up  For one thing, there are stacks of books that outline the step-by-step process of log structure building -- so anyone desiring written guidelines is (potentially) well served. It is true that practically all contemporary how-to manuals on the subject consider a chainsaw a given. Consequently the described techniques of log squaring, corner joinery, etc.  are, unfortunately, chainsaw-dependent...
Nor were those photos meant as a little show of the "look, we're cool" kind. Rather, the core message was simply the re-stating of what every backwoods person of this continent knew 100 years ago: To build a home from standing trees, the only tool one really needs is a good ax.
We did use additional tools, simply because they were at hand's reach, made the job easier or quicker, and still adhered to the hand tool principles. However, I'm mindful that many of the tools we are presently privileged to own may not be available to all people needing (or wanting) to do similar work. So as I work I find myself continuously gaging the "essentiality" of them -- in my present life and in view of most people's "less fat" future. Let's be honest -- how many of the Earth's citizens could ever own all the tools we used in this little cabin project?
In any case, here is the list of additional tools (besides the various axes), in order of their importance (as perceived by us):
1) the buck saw or bow saw -- used primarily to cut the logs to length and to make the cross-gain cuts while shaping the dovetail joint. I should add that had we chosen to make the more popular round notch corner joint, the saw would quickly lose its merit.
2) the level  -- to mark the center-line of each log end, before hewing and/or defining the dovetail joint.
3) a small (12") square -- to mark the width of the dovetail.
4) two drawknives -- the straight one for touching-up the squaring of the log's sides (primarily accomplished with a standard double-beveled ax), and an acutely curved, hollowing style one for the finishing of the groove on the underside of each log; this, of course, only for the so-called "chink-less" method of contour-fitting that is used in this case. Both of these drawknives, however, could be dispensed with easily because the side of the log touch-up is purely cosmetic, and the underside grooving can -- even if it is somewhat trickier -- be accomplished with the ax, which is how we initially remove most of the wood.
Of course, we do use a marking tool -- a soft pencil (or an indelible one when the wood is wet). It is convenient, but one can get by without it. A spike, point of a knife, thinly shaped piece of charcoal etc. can come to the rescue, if need be.
Other convenient aids are a scribe, an adjustable angle gauge, flat chisel (1 1/2")  and/or a slick. Any of these may or may not be found with us on the building site. The last three of them are only useful for the dovetails, but progressively more often the chisel and the slick have been made obsolete by a nicely sharpened 1-3/4 to 2 lb ax on a 23 to 25" handle. (The two other versions we use on a project like this are a 2-1/2 and 3-1/2 or 4 lb, the latter with a rather wide 6" face, though not a bona fide broad ax.)
Please understand that all of the above is NOT a "recipe". These are simply tools that (after more than a few hours of experience) we presently use -- a "kit" that tomorrow may change...
In closing:
Taking the "between the lines" intended encouragement of that little cabin profile (just do it!) a step further, we hoped to remind the readers that the ax (as well as other human body-powered tools) is likely to make at least a partial comeback -- not as a cute re-enactment of history, but as a serious energy-conserving alternative. An ax, in my view, is not an "old fashioned" tool.  "Timeless", or -- at this point in history -- "futuristic" may be a more fitting term...
Cheers,
Peter
Posted by Peter Vido at 10:05 PM 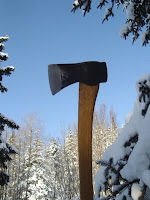